Bonus Line now comes in a size which allows it to be collated along with regular CHAMPION paper!

Add more excitement to your game by including BONUS LINE.

This 6V2 cut paper features 3 random numbers from 1-75 as “Bonus Numbers” across the top of the page.

Play your regular pattern game or coverall (black out). If a player covers all three bonus numbers in the first three balls called in the ordered called, pay that player a specific amount – $400, $500 or a $1,000 based on the your rules. 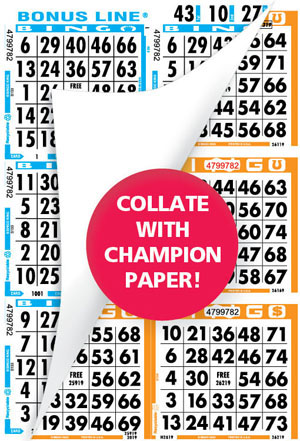